"REFORMATION PIONEERS ARE FORERUNNERS AND SCOUTS, AND ARE APPOINTED BY GOD" 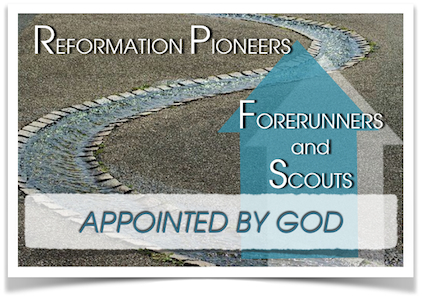 A word from The Holy Spirit through Mary Lindow

The English term "Pioneer" was originally derived from a French word meaning PICK AX. Later it was also used to communicate the idea of a foot soldier. The Germans use the term "trench digger" to get across the idea of a pioneer.
PREPARE AND REPAIR THE ROAD
A pioneer during times of war was one who marched before an invading army to prepare and repair the road. They did everything from clearing away barricades to setting mines for destroying the works of the enemy.

PIONEERS ARE FORERUNNERS AND SCOUTS.
Like Jeremiah, a pioneer is one who goes ahead of the crowd to remove obstructions for the purpose of preparing the way for others that must soon follow.
"See, I have this day set you over the nations and over the kingdoms, To root out and to pull down, to destroy and to throw down, to build and to plant." (Jeremiah 1:10)


THESE PEOPLE DO NOT SET MINES AND “BLOW UP” MOUNTAINS OF UNGODLINESS JUST FOR THE THRILL OF WATCHING THINGS BLOW UP!
No, the pioneer understands that it is his job to prepare the way and make it easier for others to enter into the unmistakable presence of Jesus Christ.
When there are earth shifts or earth “quakes” occurring in the plates of the soil of "Terra firma" - there are shakings, upheavals, and literally fully destroyed old pathways, roads and highways, as well as, the bringing down of structures and habitations.
WE AS PEOPLE ARE REALLY GOOD AT WEARING THINGS OUT!
We wear out people, policies and procedures to ad nauseum! And so, we wonder why the Father must bring those “times of refreshing” only after we repent and deal with our tendencies to want to have everything lined up, functioning like well oiled machines, and…"Controlled!"

“Repent, then, and turn to God, so that your sins may be wiped out, That times of refreshing may come from the Lord.”  Acts 3:19

THE FATHER HAS NEVER STOPPED CREATING!
He has never ceased to impart brilliant creativity and mind-blowing new discoveries to mankind! He makes things new EVERY MORNING!
It is what we do to God’s creative plans that sour the way it was intended to produce fruit and seed.

AS THIS NEXT WAVE OF GOD’S DIVINE PLAN BEGINS TO BE “REVVED UP” IN THE EARTH,
FOLKS WILL BEGIN TO ATTEMPT TO ARTICULATE AND DEFINE IT.

MANY WILL TRY TO SELL IT,
CAPITALIZE ON IT,

AND…
…TRY TO CONTAIN IT.

I FOREWARN YOU FROM THE SPIRIT OF GOD-
Just as the manna went moldy if kept or “contained” longer than allowed, so will man’s attempts at trying to “bottle” and distribute this Fresh Wind of Glory which is beginning to manifest from the Throne of God.
SPIRITUAL BALANCE AND A WARNING TO THE SENIORS AMONG US
Moses arrived at the “gate” of his final destiny, the Quest for the Promised Land, but...it was not just the command of the Lord in action that He was required to model. NO! The attitude of His heart towards those coming up underneath him was what God became angered at and…which disqualified him from entering the Land of Promise. The New “Wave of Divine Glory and provision for another generation."
And Moses and Aaron assembled the congregation before the rock and Moses said to them, Hear now, you rebels; must WE bring you water out of this rock? And Moses lifted up his hand and with his rod he smote the rock twice. And the water came out abundantly, and the congregation drank, and their livestock.   Num 20:10-11
These people having no water were frightened and rebellious toward Moses, calling out insults and being nasty. (When people are immature and desperate, this is characteristic of their behavior.)
At first Moses went to the Lord about all this, instead of retaliating with name-calling. Then after the Lord told him to "tell" the rock to give forth water, Moses in his frustration and impatience yelled at those people calling them "rebels".
IMPATIENCE IS BROUGHT ABOUT BY "PRIDE"
It's pride that lifts us up to the place of thinking we're better then others, therefore having the right to be impatient with them.
God told Moses to speak to the rock in front of the people and from this rock water would come, giving the people the opportunity to see the power of God working on their behalf. But Moses in hitting this rock went directly against what the LORD told him to do. He not only hit it once, but he hit it twice! This being rebellion robbed God of any glory, as well as going much deeper then Moses realized.

Moses had a life long struggle with anger, and he did not master it. He modeled the anointing with a crusty anger and a withering exasperation…at the people’s cries and need for provision.

"Fathers, don't exasperate your children by coming down hard on them. Take them by the hand and lead them in the way of the Master."Ephesians 6:4 (MSG)


MAY THOSE AMONG US WHO HAVE HAD YEARS OF “PIONEERING AND DESERT WALKING” BE EVER SO CAREFUL IN THIS NEXT KINGDOM DISPENSATION to not become sour, harshly opinionated, or brash, and in so doing...strike out in anger at those now coming up asking the question of;  “Where is the water the fresh cleansing drink coming from?”

THE BLOW TO YOUR HEART WILL BE THE DISQUALIFICATION OF FINAL FRUITFULNESS.
The Lord will send in an Aaron to finish the work. One who has learned the lesson of humility and trusting only in the Voice of God. Not simply dogged and teeth grinding follow-through without mercy or patience.

TO THE NEW BREED OF FATHERS AND MOTHERS
AT THE GATE OF GENERATIONAL INFLUENCE
The Spirit of God would caution those of you now arriving at the “gate” of generational influence, to weigh in the balance of Heaven - your heart motives.
Can you truly say that you are positioning yourself to be a mentor, one who trains fresh runners, in how to grab hold of the “passing of the baton” correctly in order that the next leg of the race is run fluidly and without stumbling?
For you see! That is what you have been painstakingly prepared for over the past few years or more! If you are fixated on finally becoming a “Voice” so that others might know of your personal greatness and oozing impartations, you too will be disqualified from the weight of glory that is going to fall upon the saints in this season. There is still time to adjust the insecurities, the hidden sins of presumption and ego stroking, and to simply… surrender.
GOD IS LOOKING FOR THOSE THAT WALK WITH THE HEART OF DAVID, AND BUILD ONLY FOR HIS GLORY ALONE.
Solomon answered, "You have shown great kindness to your servant, my father David, because he was faithful to you and righteous and upright in heart. You have continued this great kindness to him and have given him a son to sit on his throne this very day. 1 Kings 3:6

FORERUNNERS ALSO BRING UP THE REAR!
Not only will forerunners be pioneering pathfinders but they will also cheer on, “shepherd” and watch over the flanks of new and eager, younger legions of emerging pathfinders and “seers.” They will parent, counsel, advise, and pick-up and motivate the stragglers, the weary, and the shattered, bringing them into restoration and a family embrace.
WHEN “STARS” START TO IMPLODE
“What happens is that as the star's outer envelope ex-pands rapidly while the core collapses rapidly, a vacuum is developed at the interface of the core and the envelope. The result is comparable to what happens when a building is demolished. An implosion occurs; matter begins hurtling itself inward to the intensely hot core of the star. "An imploding star is a very dangerous place to be.” It’s like pouring gasoline on a fire.
~ Bob Sheldon-Astronomer at Behlen Observatory

THIS SEASON WILL BE ONE THAT SHOCKINGLY BRINGS AND END TO THE "SUPER NOVA" CONCEPTS IN MINISTRY.
People will be sickened and again “worn out” by the demands, and pumping of wallets and overtaxed service to bloated egos and assumed power players. Things will be imploding on the inners core level of ministries not steeped in humility and equal sharing of goods, service, and prayer, although for awhile, they will still appear to shine brighter and brighter.
When the implosion is in full blaze, many will be devastated and “burned” by idol worship and “star gazing” rather than seeking the Daystar of Heaven.

THE SHIFTING OF THE “SPIRITUAL SOIL” OF THE EARTH HAS BEGUN,
and what remains after shaking will be the sounds of simplicity, purity, and a magnification of the Worship of God, not the worship of God... in man.

THE SPIRIT OF GOD HAS BROUGHT WORD AFTER WORD OF PREPARATION AND PROMISE TO GOD’S PEOPLE.

LET THOSE THAT HAVE EARS TO HEAR, LISTEN TO WHAT THE SPIRIT IS SAYING...
…AND HEED ITS VOICE.