"Walking in the Way of the Widow" 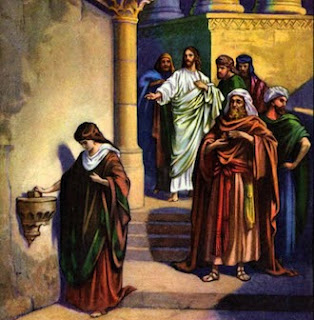 
“If Jesus Christ be God and died for me,

Then no sacrifice can be too great for me to make for Him.”

She was a woman. She was poor.

She was also a widow who was down to her last two coins. These are facts that Jesus also knew about her.

She was a woman of great faith. She became a living sermon. She remains a picture of faith as she put her whole trust in God, not holding anything back.

This unnamed woman is known now by her marital status and her coins rather than her name, for the story is “The Widow’s Mite” and she is “The Widow.” Yet we should be careful to note that it is the story of “The Widow’s Mites” as the woman had two small coins. Each of her coins were worth one four-hundredth of a shekel or what we might think of as an eighth of a penny each. Too small to bear a stamped imprint, they were the grimiest of coins in the empire of Rome.

JESUS HAD BEEN TEACHING IN THE TEMPLE COURTS.
On his way out, he pauses over and against the coffers to watch as offerings are made. Each person would walk up to one of the thirteen trumpet-shaped receptacles, which were lined along the wall of the Court of the Women. As they tossed in their offering, the person was expected to say out loud the amount and purpose of the gift in order to be heard by the priest taking collections.

It would have been a remarkable sight to see people in fine clothes tossing in large sums, calling out to all how much they gave. And in such a group, who would even notice the widow tossing the two smallest coins in the empire into the offering? Yet, in a move that is so very like him, Jesus notices and calls attention to this act of faith.

Jesus calls his disciples together and says,

“Truly I tell you, this poor widow has put in more than all those who are giving to the treasury. For all of them have contributed out of their abundance; but she out of her poverty has put in everything she had, all she had to live on.”

Jesus knows that these are not any two coins, but the woman’s last two coins. The text says, “All she had to live on,” but in the Greek translation the meaning is even more moving and meaningful. What is really said is that she put in her “bios.” It’s the word from which we get “biology,” the study of life. For Jesus tells us that the widow put her “life” into the temple treasury that day.

THE WIDOW WASN’T DEPENDENT ON HER MONEY OR HER STATUS IN LIFE;
she had none of these. She was dependent on God and her neighbor for everything. She didn’t have two feet to stand on; she didn’t have bootstraps to pull up. She was totally dependent -- and that’s what Jesus pulls out of her story like a pearl of great price. This is what we are to be like before God -- dependent on nothing but the grace of God. We are to be people without any resources except the riches of God’s mercy.

THE ISSUE IS NOT HOW MUCH WE HAVE IN THE BANK,
but what that money is for us and to us. Is it our heart, our security our source of power, or is it a tool? Are we dependent on our money to give us all we want and need from life, or are we dependent on God to make us flourish? “If you follow me”, Jesus teaches, “You will walk in the way of the widow.” Live lives that show in everything you do and say that you are dependent on God for all you have and all you are.

IT WOULD BE NICE IF MARK FILLED IN MORE DETAILS FOR US.
Was Jesus’ arm around the woman as he said, “This poor widow has put in more …” or was the woman blending back into the crowd, never to be seen again? Or perhaps Jesus asked his own keeper of the purse, Judas Iscariot, to give something to this woman so that she would not go hungry that evening. Or better still, did the widow come to be a Christ follower? Did she join with the other women who journeyed with Jesus from Galilee to the cross and beyond?

THE GOSPEL NEVER ANSWERS THESE QUESTIONS.
The nameless widow who gave two small coins fades into the background. We may want to know her name in order to name churches, schools, and organizations in her honor. We may want to give her a place of honor in Jesus’ stories alongside disciples whose names we know, though their trust in God wasn’t always so exemplary.

But perhaps namelessness is appropriate for this living parable. And maybe it is best, too, that we don’t find out how her story ends. The nameless woman whose ultimate outcome we never know is perhaps an even better picture of trust, for her story was a precarious one. She went to the temple that day not knowing if she would ever have two little coins to call her own again. It could have been her path to a life of begging or even a place on the road to starvation.

BUT IN FACING AN UNCERTAIN FUTURE,
the widow reached out to God. She trusted that if she gave everything she had to God, even the little she gave would be honored. And whether she was repaid generously by Jesus himself, or God cared for her in some other way, we, too, have to trust. We trust that the widow’s story turned out all right. We trust that whether she lived or died, she was God’s.

By her example, Jesus shows that what we withhold may matter more than what we offer. The widow was a woman of great faith, who held nothing back. She knew what Jesus’ disciples were just learning: we are to share; knowing that everything we have is God’s already. We can’t give God anything. But we can offer our very selves to the Kingdom of God, holding nothing back.

I KNOW THAT PERSONALLY IN MY LIFE TIMES HAVE BEEN TRYING,
and supplies for living and provisions for simple pleasures have become leaner. The ability to go to the nations and cities that I have been to in past years to tell of Christ’s goodness, and to care for those whom he sent me too has suffered a great cutting back, as others who could once assist in sending me, have also met with leaner times. I have recently worked three quarter time job positions to help financial obligations. I find it amazing just how many well intentioned folks find reasons or theories that seem to comment on why God is "allowing me" to encounter some of these adjustments. Truly, it is best to remain silent and not engage in too much dialog with those who lack the basics of discernment and empathetic graces!

YET, MY LOVE OF GIVING AND SHARING HAS NOT DIMINISHED.
It in fact, has increased. I am finding creative and sometimes extreme sacrificial ways to bless others and to care for others whom I love and desire to bring help and a modicum of comfort to.

HAVING TO “GO WITHOUT” IS NOT A MODERN DAY POPULAR THEME
to many, and is often viewed as repulsive to those who seem to have plenty. Sadly, also found among some groups of self-gratifying and critical believers, there is a cynicism that breaks the heart of God when they voice their “concern” when others who are Christians as well may be losing jobs, homes, and other sustainable things.

Their condescending snarls and “tisk tisking” posturings sicken and shatter the hearts of those who are in agony and loss. I am absolutely certain that God is not only horrified that one of his children would rise up as judge and commentator regarding another child of God in this type of struggle, but in fact, am sure that God Himself probably has brought those who are in such sorrow, across the paths of those who need to be broken and delivered from their carnal deceit and passivity to help free another from the chains of anxiety and grief.

IF YOU GIVE, DO IT PURELY.
Not to get, not to demand multiplication, not to posture, not to be known and certainly not to be thanked! For all of these are repulsive in the eyes of God.

When you give, let it go freely to those whom God has shown you, those whom HE is directing you to. And…. LEAVE it in His hands to manage.

JESUS SHOWS US THAT OUR DEPENDENCE ON GOD LEADS TO JOY,
and thanksgiving. If God is running the universe and ruling my life, I no longer have to save myself, prove myself or justify myself. I’m the work of God’s hands. I rest and work in those hands and I shall die in those hands. To be free of those hands would be death to me, because in them is life abundant.

She was a woman.

She was a widow down to her last two coins.

She was a child of God who placed her whole life back in her loving creator’s hands.

Can you and I do the same?

Duplication and sharing of this message is welcomed provided that complete message and website information for Mary Lindow is included. Thank you.

If you are impressed by the Holy Spirit to  share in giving towards assisting in Mary's service to the Body of Christ through international ministry travel, podcasts, prophetic music, teaching and mentoring, please go to the Pay Pal donate link provided to send your offering.
It is fully tax deductible and accounted for.