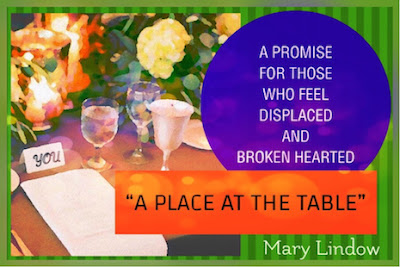 By Mary Lindow through the Holy Spirit
Preface:
The Lord was tremendously intense with me about the preparation and study that went along with the prophetic insights and words intermingled with this message. I would like to encourage you to read it all thoroughly and to not only skim through it quickly.
This is an hour when the Word and the Spirit are being brought together to demonstrate the ultimate power of Christ!
In His Shadow, Mary

"Mephibosheth ate at David's table as one of the king's sons.
Mephibosheth lived in Jerusalem, for he ate endlessly at the
King’s table, even though he was crippled in both feet."
- 2 Samuel 9 vs. 11b-13

THE OFFER OF MERCY
David didn't want to add to Mephibosheth's Misery. David offered mercy.
Mephibosheth - in his amazement and skepticism - is restored.
No, he didn't retrieve the ability to walk. Mephibosheth's weakness did not vanish. The end of the scripture is clear about that. "He was crippled in both feet."
But he was given a place at the table of the king.
This goes far beyond giving Mephibosheth what was rightly his!
THE HONOR OF A CLOSE RELATIONSHIP WITH THE KING
David gave Mephibosheth the honor of a close relationship withthe king. The miserable, unfair, undeserved events of his past didn't change. But he was re-established within the kingdom and given an opportunity to live out the rest of his life with dignity.
Because David - the King - was merciful.

DAVID KNOWS THAT HE HAS BEEN AN OBJECT OF GOD'S MERCY IN HIS LIFE.
That he has already been delivered from extreme circumstances and from ...his own unpredictable behavior.
David is merciful, because he has received mercy - a melody that will continue throughout David's entire life, even when David didn't deserve mercy. And - on another level - David knows that, as he acts as the status of king - also by God's anointing, and not his own skill - that he must model the mercy of God within the kingdom.
BLEMISHES OF THE "CRIPPLED" BRIDE
Just like in Ephesians 5 are the blemishes of the "crippled" bride...she is much like Mephibosheth.
Hiding, fearful! And....the King of our souls, Jesus...restores and cleanses us...brings us to His table as His Bride, and covers our lameness, our disfigurement underneath the linens of the bridegroom's table where no one dare point out our imperfections.
We are perfected BY His Mercy! David knew that human beings and a society that exist without forgiveness and mercy are already doomed to self-destruction by their bitter doubt.
JESUS DIED FOR THIS VERY REASON.
SO THAT WE MIGHT MODEL HIS KIND OF GUTSY FORGIVENESS AND MERCY.
AND SO THE STORY FALLS TO US AS EMERGING LEADERS IN THE KING'S KINGDOM!
We who are like Mephibosheth who have been injured by dreadful circumstances and by careless people; and we who are like David, have the opportunity to be instruments of mercy.
We who are like Mephibosheth and David who have received mercy; and we who must decide if we will live lives of resentment because of prejudiced facts or ...live lives of gratitude because of undeserved and unexpected mercy.   The story falls now to us.
BUT MAKE NO MISTAKE.
AS WE HAVE BEEN VICTIMIZED,
WE HAVE ALSO BEEN DELIVERED.
Remember, David - the King - had to decide if his kingdom would be one of dread or grace. David had to decide if his realm was going to be established on grounds of vengeance or the refinement of mercy. In being an instrument of grace, David is setting the stage for his great, great, great grandson Jesus, who will be the ultimate expression of mercy to all of us.
In the entire history of humanity no one was more misunderstood or viciously abused than David's ultimate successor, Jesus. Yet no person was ever more merciful.

AS HEIRS OF DAVID AND CHRIST IT IS NOW UP TO US TO PUT INTO PRACTICE THE VERY TREASURE THAT DAVID HONORED IN THIS STORY.
Loyalty, respect, unwavering love, and the well being of others.
Like David did for Mephibosheth, God has honored and blessedus with the promise of eternal life, inviting us to dine at His table, in His kingdom eternally. Also, God does this, not because of any goodness upon our part, but "because of Jesus."
THAT IS WHY WE ARE HERE TODAY
AND WHY WE ARE PART OF THE BRIDE OF JESUS CHRIST.
WE ARE HERE BECAUSE WE HAVE BEEN BROKEN.

And because He has restored - and is restoring - US by His mercy, He invites us to His table, we MUST look around to see who else needs a place at the table, on His behalf! Not out of our great "earned reputations" or past accomplishments! No!
We as models of the Fatherly and Motherly compassion of a heavenly King invite others, to the table of "covering" and honor. We bring mercy, expressed with "tender hearts."
The best person to want to be like is not always the strongest or the best looking!! When we become like Mephibosheth, we can truly understand mercy and grace.
BEING LIKE MEPHIBOSHETH MEANS:
Realizing that the king sought me out.
Understanding what I deserved from the king.
Acknowledging the ones who brought me to the king.
Humbling myself in the sight of the king.
Rejoicing in the words of the king.
Accepting the provision of the king.
Adjusting my life to the requests of the king.

"Restore to me again the joy of your salvation,
And make me willing to obey you."
Psalm 51:12

Duplication and sharing of this message is welcomed provided that complete article, podcast link and website information for Mary Lindow is included. Thank You!
Copyright © 2019 " THE MESSENGER "
www.marylindow.com
www.globalprayerrooms.com
www.marylindow.podbean.com
Your Gracious Support and Donations Are So Very Helpful  And Assist Mary In Publishing Her Teaching Podcasts and Blog Materials.THANK YOU!Please go to PAYPAL to donate  or support this blog:
Donate to the tax deductible ministry name of: paypal.me/mlindow (His Beloved Ministries Inc.)
or  You Can Mail a Check or Cashiers Check to:
His Beloved Ministries INC PO Box 1253 Eastlake CO 80614 United States
Do you or a loved one need prayer?

There are faithful intercessors around the world who are
ready and who are prepared to pray for you.
Please send your Requests via secure web form at:

Links to this post
Labels: A KINGDOM YET UNSEEN, A PLACE AT THE TABLE, A PROMISE FOR THE DISPLACED AND BROKEN HEARTED, disappointment, GENERATIONAL INFLUENCE, GOD IS AT WORK, Mephibosheth, Mercy, Prophetic Insight, Shelter and Refuge
Newer Posts Older Posts Home
Subscribe to: Posts (Atom)