"The Voice of A Child" - Sweetest of Sounds 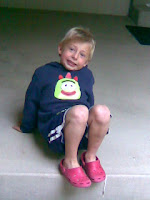 As I sit here on a pre-Christmas evening with candles flickering and the wafting a pine and spicy scent all around the room, I am stirred to write the last message for the year 2011 that I feel the Father would have me share.

I know that it is a very busy time for most of you who are either listening to this as a podcast or reading the message. However, I believe that if you would take a few minutes to receive what the Lord has for you I this last posting of the year, you will be not only ministered to, but also, deeply touched.

I have often wondered what it was like to hear the first utterances of Jesus as an infant. Most likely, he cried out just like all children do when they enter earth's bright, cold and harsh world, leaving the warmth and protection of a mother’s womb.

I can imagine the entire Kingdom of heaven bending its ear to hear the “sound” of Hope and promise as Jesus cried out after taking in his first breath. All of creation knew that this cry was the voice of salvation. Heaven was once again, wedded to earth! The “second” Adam…. Was here.

When our first son Joel was born,
my first thought when I heard him begin to cry was that he sounded like a baby lamb “bleating” for his mother. And that sound caused my heart to soar into a moment of overwhelming elation. I was a Mother!! And “life” had cried out from the new being, birthed from my own body.

When our second son Timothy was born,
I was even more aware than my first birth, of the supernatural event, taking place. I was being entrusted by God to raise up children to be “voices of His promise” in the earth.

I desire to share with you the gift of that “sound” or the legacy of a generational sound being passed down through three generations. The next part of this message will be, just that.


Months ago…
… I was preparing a podcast and our Grandson James-David who is seven years old was listening to me edit the audio. His Daddy, (Joel) is a gifted musician and vocalist as well, and has sung and played for this little boy since he was born.

When I had finished recording the message that I was preparing I then asked little James if he would like to hear some music I had been working on for a potential new recording project I was starting to put together. I played the musical piece for him off of my computer where I had been working on it. When it finished, he said to me, “Grandma? That music sounds like God music. It made me feel so happy in my heart!”

Of course, it made me just burst inside of my own heart with great tenderness to this perceptive child! Then, he told me that he would like to make a podcast too, just like I did! I asked him what would he want to say and to whom if he “did a podcast.

His words were,
“Grandma. I want to speak to the people who are sad and feel alone and tell them God is there and He loves them.”


And so… I let him tell me what he wanted to say,
…And I recorded him speaking it, as the music that I wrote, played along with his message. Little did I know, that God had timed the music and that little child’s heartfelt prayer to match in not only timing, but in melody and beauty. The music ended just as he did, and he sang out all on his own at the end, without any of my prompting. He had heard the music only twice.

I will not tell you much more…
…But rather let you hear for yourself, the “Heart cry” of a child, and the spontaneous expression of praise that came out of this moment. I have played it for a few other friends, and the presence of God fell upon them, and there was weeping and a stunned amazement at not only the impact of the message, but also the reality of
“ A little child shall lead them” type of truth hitting them right between the eyes!
(And… into the very middle of their hearts.)

May the “Voice” of God speak to you and move you to worship as He ministers to you through this pure and simple child’s message and prayer. It is God’s gift to the weary, the lonely, and those who hunger for more of a simpler and holy life hidden in the Palm of His hand, saturated in His word.

“Their children will be mighty in the land;
the generation of the upright will be blessed.”
Psalm 112:2


If you are reading this rather than listening to the audio podcast, please click the link below to be taken to the audio recording or play the audio on the podcast player above next to the picture.

Perhaps you might know of someone who needs to hear the “Voice of God” speaking to them in innocence and pure Grace.” Pass this on to them as a gift, from Heaven.

Have a very Blessed and Meaningful Christmas. HAPPY BIRTHDAY JESUS!

In His Shadow,
Mary Lindow
www.marylindow.com


Duplication and sharing of this message is welcomed as long as the complete message
and website information for Mary Lindow is included.